Performed to “Accordion based music” is an African dance style known as Funana. This “couple” dance is said to have originated from Cape Verde. This dance style has essentially been developed from a musical genre that known to possess a variable tempo. Furthermore, this dance is characterized by quick feet movements. In addition, to the music this dance is also accompanied by a song written in the “Creole” language.

a. History/origin of Funana:

The dance style was actually created for a musical genre called “Funana” which was developed during the beginning of 20th century in the largest island in Cape Verde called “Santiago” while it was under the colonial rule of the Portuguese. Furthermore, this style of dance developed included the use of instruments such as ferrrinho and the accordion.  In addition, this dance only became popular post its independence in 1975.

b. Costumes used in Funana:

The costume worn by the performers (both males and females) vary according to the gender, and they are as follows:

c. Music involved in the Funana:

The music used for this dance style comprises of a variable tempo, and the musical instruments involved include the accordion, ferrinho, drums, shaker, cabasa, guitars, and synthesizers. In addition, the song accompanying the music includes lyrics written in the Creole language which when literally translated in English means:

Mouth of who starves

Oh, Semi Lopi, everybody steps on you, but you

d. Training availability and the technique involved in the Funana:

In terms of technique, this couple dance involves a male and female holding each other using one arm and a hand with the other arm. In addition, this dance also involves rapid movements of the feet and inflexion of the knees. As for training centers/schools, there are none available around the globe since the “couple” dance essentially is only performed in Cape Verde. 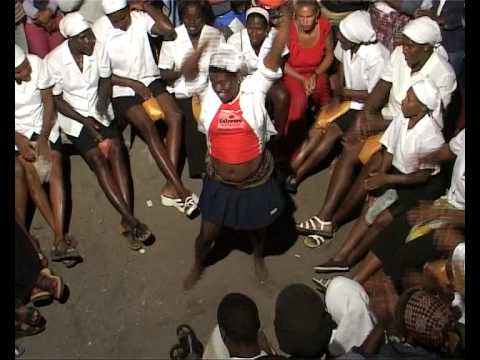