Performed to a “quick duple meter rhythm” is a dance form belonging to “Eurasia” known as Tropak. This “folk” dance is said to have originated from Slobozhan region of Ukraine. In addition, this dance is very similar to Hopak (National dance of Ukraine) with the exception being the tempo used. Furthermore, the music accompanying this dance has been played by blind musicians referred to as “kobzars” using instruments such as banduras and kobzas. Unfortunately, it was during the 1930’s that the popularity of this dance in the Ukrainian society began to gradually fade away.

a. History/origin of the Tropak Dance:

It was during the beginning of the 16th century that a social dance called “Hopak” was first created in Ukraine by a community known as “Cossacks”. It was then using Hopak as template that this dance style was created which was called “Tropak”.  Furthermore, the only major difference between the Tropak and Hopak dance styles lie in the tempo of the music that was used.

b. Costumes used in the Tropak Dance:

The costumes for the performers (both males and females) include a long blue skirt/pyjama, a red scarf which is tied around the waist and a pair of high heeled shoes (for females) and a pair of red coloured boots (for males).

The music involved in this dance form essentially comprises of two alternating chords namely dominant and tonic.  In addition, the musical instrument mainly involved would include violins, bagpipes, cimbaloms, and fifes.

d. Training availability and technique involved in the Tropak Dance:

In terms of technique, this dance basically involves performers using a syncopated stamp move done mainly to a “quick duple meter reading”. As for training centres/schools, there are none available around the world since this “folk” dance is mainly performed in Ukraine mainly during social events. 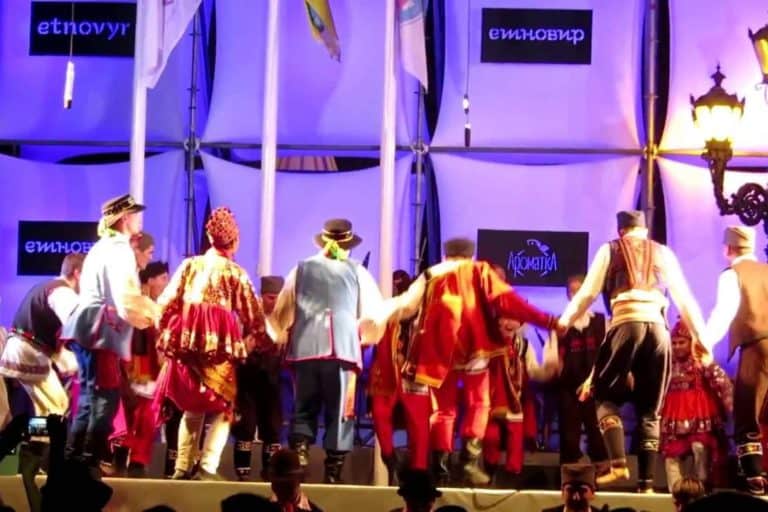