Brazilian Samba dance is considered to be ‘Afro-Brazilian’ in origin and is a renowned and very sensual dance style. This ‘Latin American’ dance is said to have originated during the 16th century from Brazil. This Brazilian Samba dance form does not consist of a set template, and hence basically comprises of different styles that minutely […]

The Lambada dance is a renowned dance form from Brazil created by fusing elements of ‘forro, salsa, merengue, maxixe, carimbo and Bolivian saya‘. This ‘Latin American’ dance has originated from the state of Para located in North Brazil. The Lambada dance style (of African origin) became extremely popular worldwide during the 1980’s particularly in the […]

Created using the energetic “Samba” as a template, is a dance style known as Samba De Gaferia. This “Latin American” dance has originated from Brazil, and is basically a “partner dance” i.e. it involves a male and female.  In addition, this dance is supposed to have developed from the Botafogo, Catete, and Rio De Janerio […]

Performed in a group by forming a circle called “roda” is a South American dance form known as Maculele. This “mock stick combat” dance is said to have originated from Brazil. Furthermore, this unique dance style involves the use of a stick made from biriba, canzi, or pitia wood. In addition, a few other Brazilian […]

Created and developed by a South American vocal group known as “Tequileiras De Funk” is a dance style known as Surra De Bunda. This “female” group dance is said to have originated from the state of Sao Paulo located in Brazil. Apparently, the Portuguese word “Surra De Bunda” when translated literally means “punishment by ass”.  […] 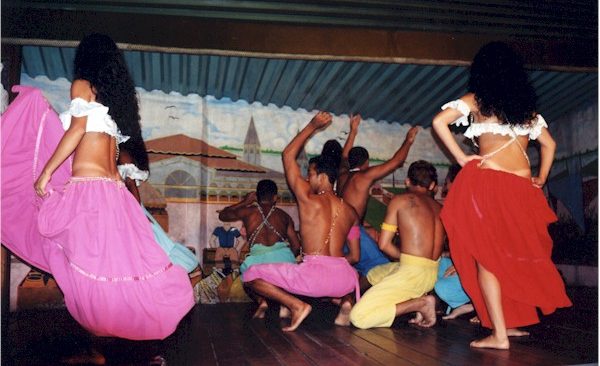