Samba De Gaferia is a dance style created using the energetic ‘Samba’ as a template. This “Latin American” dance has originated from Brazil, and is basically a “partner dance” i.e. it involves a male and female.  In addition, this dance is supposed to have developed from the Botafogo, Catete, and Rio De Janerio districts respectively. Furthermore, unlike the other forms of Samba, this style has gradually over the years evolved into a “ballroom dance”.

a. History/origin of the Samba De Gaferia:

It was in the 1940’s in dance halls known as “Gaferia” in Rio De Janeiro that this dance style was developed, and aptly named Samba De Gaferia. Furthermore, since its creation this dance style has undergone a lot of changes adding many elements belonging to the extremely sensual Argentine Tango.

b. Costumes used in the Samba De Gaferia:

Since this dance involves both male and female, the costume worn varies accordingly, and they are as follows:

The costume worn will includes a revealing dress that exposes the upper body, a short skirt, and a pair of high heel shoes.

The costume worn will includes a colourful shirt/T-shirt, trousers, a jacket (optional), and a pair of shoes.

“Samba music” is basically what is used in this dance style as well, and so the musical instruments involved would include cuicas, tambourines, frying pans played with metal sticks, flutes, and guitars.

In terms of technique, there are two basic steps that form the foundation of this dance. They are as follows:

Also referred to as “Quadradinho” is a “quick-quick-slow” step in which the leader moves his left foot back on the count of three, and presents his right forward on the count of seven.

Also known as “Saido ao Lado” is mainly used to either enter or exit the complicated moves involved in the Passo Basico.

As for training centres/schools, there are many available throughout the globe for those interested in learning this dance style which has basically evolved from the “Samba”. 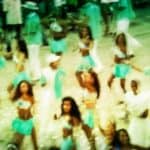