Brazilian Samba dance is considered to be ‘Afro-Brazilian’ in origin and is a renowned and very sensual dance style. This ‘Latin American’ dance is said to have originated during the 16th century from Brazil. This Brazilian Samba dance form does not consist of a set template, and hence basically comprises of different styles that minutely vary from each other. The various forms of “Samba” are Samba No Pe, Samba De Gafieira, Samba Pagode, Samba Axe, Samba Reggae, Samba Rock, and Samba Rode.

a. Samba Dance Origin and History:

This dance form was created during the 16th century when slave trading between Africa and Latin America was at its peak. It is thus the influx of large number of Africans into the Brazilian society that led to samba eventually being created. Apparently, the major elements included in this style of dancing have been mainly derived from dances belonging to countries such as Angola and Congo.

5 styles of the Samba dance

In the 1940s, this style of samba became popular. Often performed in clubs and discos, it is a duet dance that is incredibly difficult. Samba de Gafieira is referred to as “Brazilian tango’ because most of the moves and the steps are inspired by Argentine tango. including athletic movements depending on a short-long rhythm.

Samba Pessoa is a solo type based on basic 2/4 rhythm, considered to be one of the most popular forms of style today. The tempo of the music varies, but three steps are always included in each segment of music. The body has to remain straight throughout the end of the  dance, and the stepping is done with only one leg at a time.

Ballroom samba is part of the international style of ballroom dancing. It is a duet/couple dance that moves all around the dance floor. While similar styles of dance differ from their origins. This type of samba is a combination of influences from traditional samba and has developed its own unique style over the years

In the early 1980s, pagode music originated. The Pagode style is a slower, more intimate style that originated in the city of Sao Paulo. It is similar to samba de gafieira in that it incorporates slower movements with less athletic ones. introducing new instruments to samba music, and starting to add more irony and slang into the lyrics.

This style, which originated in Bahia, is considered the 2nd most popular samba style.  The dance style is straight, slower and does not have much more moving back and forth than the other styles. The music tempo is medium and filled with rhythmic drum beats.

Start with your feet together. Relax the knee arches and keep them soft and bouncy throughout.

Step back onto the ball with your left foot.

Onto the ball with the right foot, put your heel forward, shifting weight to the stepping foot.

Step back on the right foot, shifting your weight and repeating the sequence.

Allow the body to move freely and then let the arms move in a natural swing and repeat the pattern with the beats.

Partner samba style is one of the most popular types of Latin dance. This is a duet dance inspired by the Brazilian maxixe, a version of tango that evolved in Brazil as tango took hold in neighboring Argentina.

The body positions, space between partners, and hand placements are the same as in a waltz.

Repeat the step twice for a total of eight beats.

Later, step to one side together, bending from the knee as you step.

Be quick and step the other foot in toward the weight-bearing foot.

Continue tapping the foot back firmly, shifting the weight to the other foot

Step in sideways again with the first foot and repeat the style of the sequence in four beats.

Drop your hands without moving away from each other and step sideways with your first foot. Turn your body toward your partner as you swing the other foot around.

To continue the dance, return to the waltz position and maintain hand contact.

b. Costumes used in the Samba Dance:

By the 1950s, the era introduced a change in style because, earlier, the costumes were thick and uncomfortable. Female parade goers would typically wear brightly coloured bikinis rather than elaborate costumes.

In the era it was based on, greater emphasis was placed on feathered headdresses and sparkling tails. The design was in the finer details and creatively worked on accessories.

The Evolution of Samba Costumes

The style of Carnival costumes can be traced to colonial Brazil when the Portuguese introduced the tradition of Lent. The festivities of the time would see socialites dress in costumes and parade through the town.

Participants would wear masks and costumes to showcase wealth and glamor, and the rest of society would gather in front of the streets to catch a glimpse and enjoy the dance.

Brazil’s Carnival has significantly gained popularity since the 1930s. More people wanted to get involved in the event. Local businesses began to design cheaper and more comfortable dresses for dance in lighter colours.

People from all walks of life came together to celebrate the Rio parade in 1932. Hotels, theaters, and clubs had their own celebrations and contests.

The more innovative feel of Carnival continued to develop over the years. Men started attending the celebrations, wearing their most eccentric costumes.

The music for Samba dance involves musical instruments like the cuicas, tambourines, frying pans played with metal sticks, flutes, and guitars. There are various music and songs for the samba dance easily available online.

d. Training availability and technique involved in the Samba Dance:

If you are looking for how to dance Samba and the Samba dance technique, the popular form of Samba (i.e. Samba No Pe) comprises of a basic body movement that requires the performer to maintain an erect body posture while bending one knee at a time. The feet need to move only slightly (i.e. only a few inches at a time). Furthermore, the performer is expected to dance to the rhythm of the music being played, with the pace varying from about average to rapid.  In this dance, the men are also supposed to dance by placing their entire feet on the ground, while women dance wearing high heeled shoes thereby not placing entire feet on the ground.

To get to learn the Samba Dance, there are schools and centres available in Brazil in Rio De Janerio and many cities in the United States which provide the Samba dance training. Many people enrol for Samba dance lessons for performing this esoteric and sensual dance during the famous ‘Rio Carnival’. 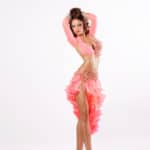 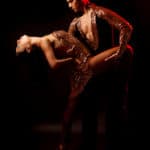 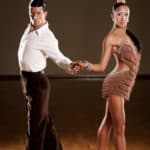 The following 3 videos show the basic steps of the Samba dance explaining how to do the samba dance. All these 3 YouTube channels provide extensive tutorials covering the basics of Samba dancing for beginners.